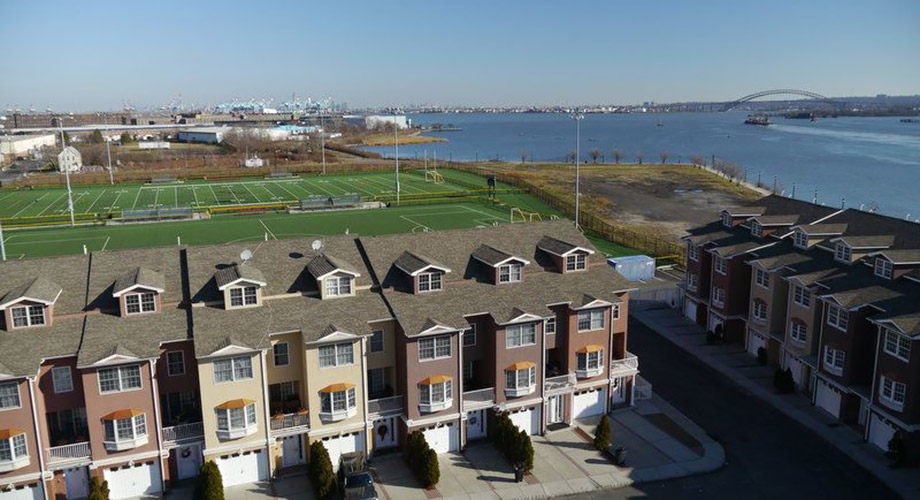 New luxury condos on the Elizabeth waterfront are the latest chapter in ongoing redevelopment efforts in a neighborhood that officials say was once the city’s most impoverished.

The HarborFront Villas gated community, on Front Street in Elizabethport, is attracting young families at a time when property values have been rising citywide, said Raymond Eshaghoff, who heads the real estate brokerage firm developing the condos.

“HarborFront Villas is a big part of the construction revamp that has been taking place in the area,” said Eshaghoff, president of the North Bergen-based BSG Management. “After seeing a noticeable gentrification influx that sparked new housing developments, we are excited to contribute by introducing this gated community on the waterfront.”

The 55 HarborFront Villa townhouses are each 2,800 square feet with water views, running in price from $309,000 to $400,000. They include three or four bedrooms, three full and two half bathrooms and a two-car indoor garage.

Buyers and inquiries for the homes have come so far primarily from Elizabeth, Newark, Staten Island and Brooklyn, according to the management company. Most of the interest has come from young, middle-class families attracted to the development’s waterfront location, security as a gated community and play areas for children, Eshaghoff said.

The neighborhood, bounded on one side by the waterfront and by the New Jersey Turnpike on the other, has seen several new residential developments in the past decade, many affordable or public housing.

In 2005, 650 substandard public housing units were demolished and replaced with 525 apartments and townhouses in the Portside, Marina Village and Heritage Village developments.

The Waters Edge Crescent development then moved in where the demolished projects used to stand on Magnolia Street, with 38 two-family homes and 10 single-family homes for sale. After the economic downturn in 2008, the unsold homes were converted to affordable housing.

Nearby, on First and Front streets, the Apple Tree Village development brought 15 new two-family homes to the area, with construction completed in 2006.

The various new developments and the construction of HarborFront Villas, along with other investments in community buildings and resources, are bringing a renaissance to the neighborhood, city officials wrote in the draft of a five-year consolidated plan to be submitted this month to the U.S. Department of Housing & Urban Development.

“As the result of the tremendous investment in this deteriorating neighborhood, owner-occupied units have increased by 12 percent and the median household income increased by $8,000,” the plan reads.