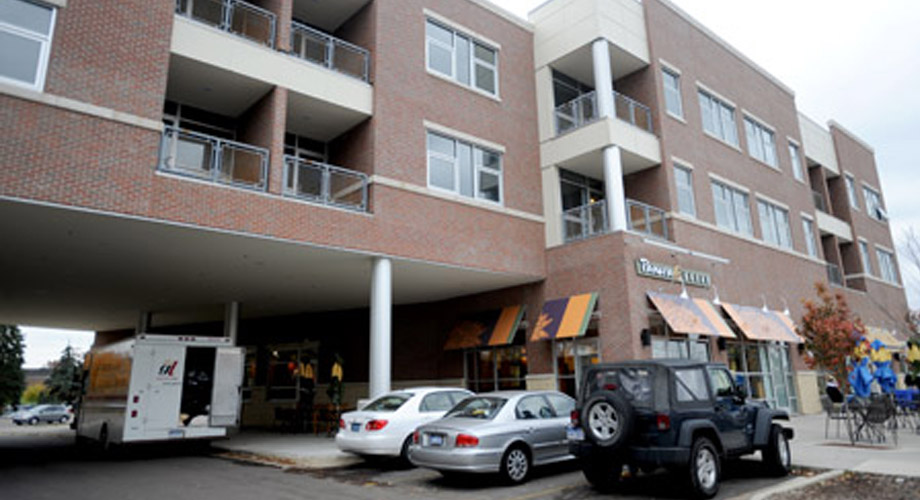 years of delays stalled one of Ann Arbor’s most visible redevelopment projects, but interior construction is now proceeding rapidly on Upland Green.

Work on the building started several years ago, marking a then-new wave of mixed-use development on a former auto salvage yard on Plymouth Road.

Now, thanks to news owners and their financing, a local team has been working to get the residential space – now 20 apartments, instead of condos – ready for occupancy by Jan. 1.

With the opening of the model unit in December, the new owners will conclude a project that’s been waiting for its final stages since it was submitted as a plan to city officials in 2004.

“We look for properties that are having difficulty coming off the ground and need attention,” said Raymond Eshaghoff, principal at BSG Management Co. of New Jersey.

They found that at Upland Green, where the shell of the building on Plymouth Road across from the University of Michigan’s North Campus raised questions for years about when the project would be completed.

A series of stops and starts, related to financing issues with two previous investor groups, plagued the project.

Yet its retail spaces attracted sought-after restaurant tenants – Panera and Qdoba both operate there – as the street-level stores fulfilled the vision of original developer Bill Conlin for expanding quality retail space in the Plymouth Road corridor.

And now, with the upper two levels on the fast-track for build-out, Upland Green will get its chance to test the market for the residential component of the project.

“I think the location … makes the property a gem,” Eshaghoff said. “The caliber of the commercial tenants speaks for itself.”

BSG acquired the property in late summer, after buying the mortgage as part of a bundle involving four different properties.

Eshaghoff would not disclose the price, but said, “This property was being traded for Â½ of what it was being marketed for a year and a half ago.”

City records show the property sold for $3.025 million in 2006 as Conlin’s original partnership closed on the land, previously Diehl’s auto parts. In 2009, Ann Arbor officials assessed the property at just over $5.3 million.

Architect Damien Farrell stands inside of the unfinished residential area of Upland Green.

But his group is well-capitalized after 20 years and millions in investments and can see the project through to completion, he said. That includes the lease and build-out for the recently opened Great Plains Burgers.

“We are privately financed company,” Eshaghoff said. “We do syndications mostly with distressed properties and assets that need a lot of attention. We have a team that we bring to the table that can quickly finish a project and bring it to is maximum potential.”

The liquidity problems that plagued the project don’t reflect the overall value and potential of Upland Green, Eshaghoff emphasized.

“The location of it is phenomenal,” he said. “… It’s not often that you get a chance to (acquire) such a beautiful property in an upcoming area. We’re proud of it.”

BSG plans to lease the property, and keep it in its management portfolio, Eshaghoff said. The company already manages about 500 units in several states, including one other Michigan property – a multi-family building in Detroit.

Conlin remains active in the project, Eshaghoff said, as a joint-venture partner.

And architect Damien Farrell is leading the local construction effort as some of the original plans are shifted from condos to apartments on a fast timetable, and floor plans undergo minor revisions.

“They’ll have somewhat of a loft feel to them,” Farrell said.

Marketing for the apartments will be done by Angie Rasmussen of the Charles Reinhart Co. Prices will range from $900 to $2,400 monthly for the one- to three-bedroom units.

Meanwhile, site plans allow a second building on the two-acre property. It was originally planned for offices, but that could change.

After finishing the apartments and leasing a remaining 900-square-foot retail space in the first building, Eshaghoff said, “We’ll revisit the issue and see what the market bears.”